The public speaking competition was organised by Amber-Page Moss, of Peterhouse College, University of Cambridge, and attracted state schools from across Cambridgeshire.

Amber visited Bassingbourn last term to deliver a workshop to our Year 9 students and to explain the competition to them.

Amelia and Elliot were supported by a group of their BVC friends (above) and English teacher Mrs Rebecca Boxall.

The Bassingbourn B team (right) had a last minute substitution at this week’s Cambridge area final of the ESU’s Churchill Public Speaking Award.

Year 9 student Lottie Bond stepped in at the last minute to compete alongside Matt Gilliland and Fraser Clapham. Fraser once again won the evening’s Best Speaker award and the trio were awarded second place overall, narrowly missing out on a place at the semi finals which will be held at Magdalene College, Cambridge, next month. 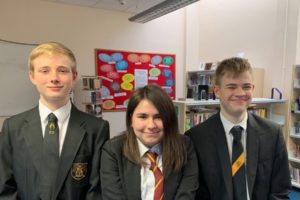