Student voice is loud and clear

The tradition of producing good public speakers from BVC has continued with another of our students being awarded a Best Speaker award.

The English Speaking Union’s Churchill school’s public speaking competition attracts entries from over 400 schools in England each year, with the Cambridge branch competition being hosted at Bassingbourn this week.

Bassingbourn fielded two teams, photographed above with English teacher and public speaking coach Mrs Rebecca Boxall. BVC team A comprised Katie Cheeseright, Ciara Free and Archie Lievesley with Katie choosing to speak on the proposal that ‘The #MeToo movement has instilled fear rather than empower people’. Special mention must be made of Ciara who stepped in with just 20 minutes notice and impressed the judged with her confidence and calm manner.

BVC team B – Jon Cheeseright, Matt Gilliland and Fraser Clapham – won through to the next round with Fraser speaking on the controversial proposal that ‘Recycling is a waste of time’.

Following in the footsteps of former BVC students Ed Evans and Iain Lynn, Fraser also scooped the main award of the evening – Best Speaker. This is the third consecutive year that BVC has won this award.

Year 9 students showed great promise at their in-college debate with 6 teams taking turns to debate against each other. (see photos right)

The debates followed the rules of the Up for the Debate competition which has previously been very successful for BVC students who have won their way through to the runner’s up position at the grand final at Eton College.

The students have been working hard on the rules and techniques of debating as part of their English lessons with the top teams from each class competing against each other in front of an audience of their peers and teachers. Students supported each other by also acting as timekeepers and chairmen.

Winning speakers from each round were Robert Kendrick, Rachel Clark and Emma Silva. 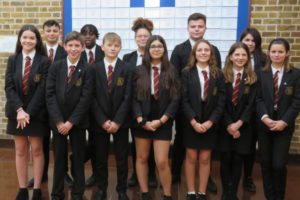 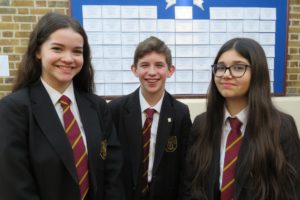 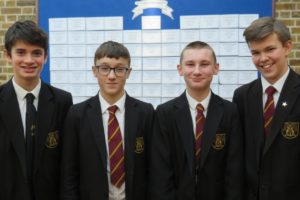