Over 100 students attended the dinner, enjoying an evening of awards, sports quizes as well as an inspirational guest speaker.

Helen Gilder, joint head of PE, said: “The students were selected because they had been valued and committed members of at least 2 extra-curricular sports clubs this academic year. Most of them have also represented the school in external tournaments and matches.

“It was a great evening with everyone celebrating this year’s sporting successes as well as spending an enjoyable evening with their fellow team mates.”

Guest speaker was the inspirational founder of Power2Inspire, John Willis.

John was born without fully formed arms and legs, and established the charity’s mission – Inclusion through Sport. Determined that his experience as a child of being excluded from sports, should not be repeated he had become an inspiration to both able-bodied and disabled sportsmen all over the world. prizewinners are photographed above with John.

The main winners of the evening were Genevra Harraway and Patrick Robinson who won Sportswoman and Sportsman of the Year (right). The team of the year was the Year 7&8 Girls Football team which reached the quarter finals of the national schools football championship this year. 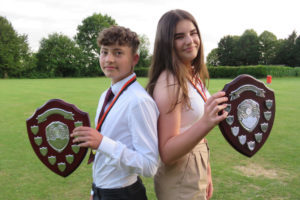