Mrs Lynn was awarded tickets for the event as a thank you for being one of the judges in this year’s competition. She was one of 500 judges who read entries from almost 113,000 children.

The competition is run by BBC Radio 2 and under-13s are invited to write a story about any fictional topic, the only rule being that they must keep their word count to 500 words or less.

Mrs Lynn said: “It was an amazing morning! We had to be at the castle by 6am so we were in place for the breakfast show starting.

“It was a huge privilege being involved as a judge and then to be invited along to the final was icing on the cake. My favourites were the stories read out by Sandi Toksvig and Hugh Bonneville.

“I can’t wait for the day when we have some BVC students in the final.”

Busted, Tom Walker and Matilda actress Francesca McKeown performed during the ceremony, which was also attended by the Duchess of Cornwall and DJ Chris Evans, who created and launched the competition almost 10 years ago.

Gold winners were Esme Harrison-Jones (10 to 13 age category) and Eve Molloy (5 to 9). Highlights from the show can be seen here 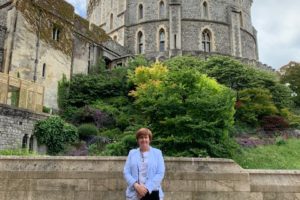