The students were invited to attend one of the union’s weekly debates by the President of the Union, Will Smart.

The trip was a celebration of the end of the debate season which saw the students successfully compete in a number of debating and public speaking competitions. They were accompanied by Mrs Daniells and Mrs Lynn.

Now the oldest debating society in the world, and the largest student society in Cambridge, the Union remains a unique forum for public debate. In the past the Society has hosted such great figures as Winston Churchill, Theodore Roosevelt and the current Dalai Lama.

BVC students were lucky enough to sit in on the hustings event for the forthcoming Union elections, listening to a cross section of University of Cambridge students pitch for positions on the Union council.

Guest debaters for the evening included Sr Chris Ham, former Chief Executive of the Kings Fund; Dame Elizabeth Anionwu, founder of the Mary Seacole Centre for Nursing Practice and one of the most influential nurses in the NHS; Eleanor Smith, Labour MP and former theatre nurse; and Baroness Jolly, Lib Dem spokeswoman for Health. Their motion was This House Regrets The NHS’s Status As A National Religion. 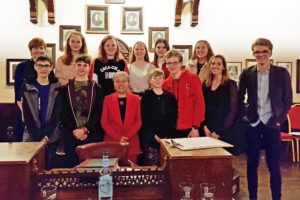