Oh what a night!

Two of our Year 11 students were honoured at the Cambridge News Education Awards – but missed out on the celebrations as they are currently on a World Challenge expedition in Tanzania.

Iain Lynn was awarded the Student of the Year accolade for his work in promoting oracy as a necessary skill for young people. The judges praised his work in encouraging younger students at BVC by setting up and running a debate club, and were further impressed by his work nationally and his involvement with the English Speaking Union and the Parliamentary Speaking Up campaign.

Libby Taylor was runner up in the Sports Personality award. Libby is a champion hammer thrower and, again, she was praised not only for her personal achievements but also her work in encouraging younger students achieve their own goals.

BVC Principal Duncan Cooper said:”This is an amazing achievement for both Iain and Libby – and testament to their hard work throughout their time at BVC.

“We are all extremely proud of them. They are exemplary students with a great future ahead.”

Iain has written the following article for our termly magazine which sums up his time at BVC:

“When I first started debating at BVC, I never dreamed it would be anything more than part of the English syllabus. Likewise when Joe Heavey, Adam Castle and myself went to the Pixl UpforDebate final at Eton, we were amazed that we’d got that far and hadn’t even prepared for the final. When we were named as one of the two teams taking part in the grand final, we were shocked and stunned!
“Over the past 2 years every expectation I have had has been exceeded. When we started a debating club at BVC we expected only a handful of students to turn up – then we had to make a second group because there was such a demand. At every step of the journey, I have been accompanied by incredible speakers and friends, people who brought such different styles and energies, it was like I was debating for the first time at every competition. Speakers such as, Joe, Adam and Ed Evans, and our teachers Mrs Boxall and Mrs Daniells.
“It may sound false, but debating is truly not about winning competitions, it’s about so much more, it’s about meeting new people, it’s about honing your speaking skills, and it’s about being able to stand up and speak out. That may be terrifying for some – I still feel sick to my stomach before every speech, even if it’s just in front of my own parents. But the most important lesson oracy can teach you is that just because you’re nervous doesn’t mean you shouldn’t do it. It means you should do it all the more, because it is never as bad as you think it’ll be.” 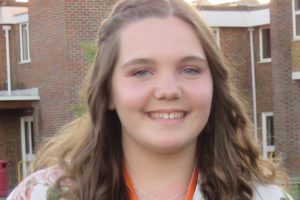