BVC student Noah Telford-Reed has been recognised as one of the country’s top achieving computing students in his age group.

Year 10 student Noah came joint third in a computing challenge – The UK BEBRAS Computational Thinking Challenge – at the Department of Computer Science at the University of Oxford.

Coming third in the Senior age group is an impressive achievement, as 14,402 students entered the first round of the category (years 10 & 11 for England and Wales). Noah was one of 55 top-achieving students who attended the final for the Senior age group at Oxford. He received his third place certificate from Professor Peter Millican at a prize-giving ceremony at Hertford College, Oxford.

The UK BEBRAS Computational Thinking Challenge, supported by Google, is designed to get students excited about computing and computational thinking. It is a problem-solving contest with questions inspired by topics in computer science. In the first round, held in their own schools, students have to try and solve as many problems as possible in the allotted time. There are six age categories. The highest scoring students from the four oldest age groups (Elite, Senior, Junior and Intermediate) in the first round were then invited to the Department of Computer Science at Oxford for the finals over two weekends in January and February. 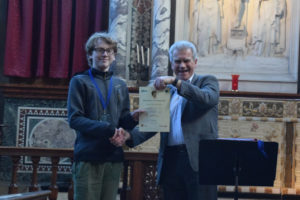