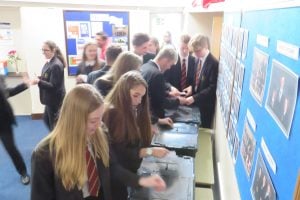 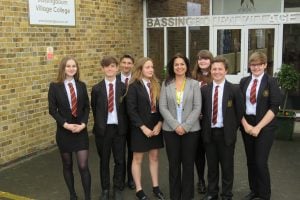 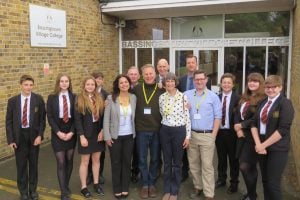 Heidi Allen, Dan Greef, Simon Saggers and Susan van de Ven were each given three minutes to outline their campaign to 200 year 10 and 11 students … and then waited with bated breath as students completed ballot papers and voted for their favourite candidate.

The end result was a close-fought battle between Labour and the Green Party, with students commenting afterwards how exciting they had found the event. “Having a speech condensed into just three minutes made it much easier to work out which candidate I liked best,” commented one
student.

Following the main presentations, a number of History and Sociology students were able to spend time with the candidates in a round table debate, quizzing them on their policies on university fees, proportional representation, refugees and how they thought politics could be made more appealing.

Duncan Cooper, Principal of Bassingbourn Village College, said: “We were very excited to be able to host one of the first of the 2017 hustings in South Cambridgeshire. I was very impressed by the knowledge of our students and just how detailed they were in their questions to the candidates.

“We would like to wish all the candidates very best of luck on 8th June.”